Dr Kelly was a brilliant man who did his best for his country. We owe it to him and ourselves to discover the true cause of his death

In this powerfully argued article, doctor and barrister Dr Michael Powers QC explains why justice demands an inquest is held 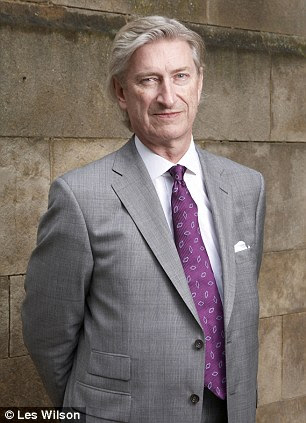 Doubts: Dr Michael Powers QC says key questions were not asked about Dr Kelly
Since his untimely death in July 2003, questions have continued to be raised about the circumstances of Dr David Kelly’s death. Many wonder whether he really killed himself and speculate that he was murdered. His sudden death shocked the nation – how could it have happened?
As a specialist practitioner in law and medicine, I feel a responsibility to the two professions to air my doubts about a case that bridges both worlds.
Any question of suicide or murder has to follow the determin­ation of the cause of death. To do otherwise risks putting the cart before the horse. It would, for example, be scientifically and logically unsound to assume suicide and then to set about finding evidence to prove it.
Before asking whether a deceased himself or a third party put the ­bullet in the head, it is necessary to determine first that there was a hole in the head and secondly that the deceased died because of it.
For 1,000 years, coroners have been investigating sudden, violent and unnatural deaths. They have got good at it. Suicide used to be a crime and a finding of self-murder is an unhappy reflection on the victim and his family and friends.
That is why suicide has to be proved to the same high standard as murder. It has to be proved beyond reasonable doubt that the deceased did the act which killed him with that intention in mind. 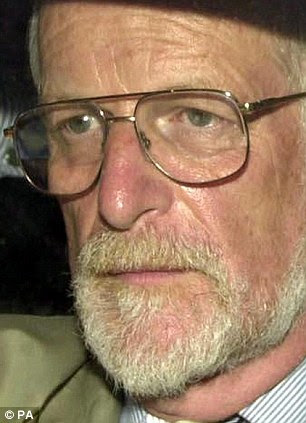 Puzzle: Many wonder whether Dr Kelly really killed himself. Below, how the Mail on Sunday reported on the story
The normal inquest process in the case of David Kelly was interrupted by the order of the Government. Lord Falconer, the Lord Chancellor at the time, exercised a rarely used power to require the Oxfordshire coroner to adjourn his investigation and to give that responsibility to Lord Hutton.
The coroner had the power to compel witnesses to attend and to give ­evidence on oath. The Government which took our country to war with Iraq chose not to give these considerable powers to Lord Hutton.
Although there were 24 days of evidence taken over two-and-a-half months, the whole of the medical evidence took no more than a half day. The evidence of the pathologist, toxicologist and forensic ­biologist can be read in 30 minutes. No one could say this was a detailed investigation into the death.
I was trained as a doctor and during my years in medical practice I often had to pass fine catheters into the radial artery in the wrist. This is where medics usually feel the pulse. It can even be seen pulsating in many people. Dr Kelly’s wrists were not slit. Neither radial artery was cut. This alone is a strange finding in someone who intends suicide by this method.
Deeper in the wrist on the side of the little finger lies the ulnar artery. It is not used for catheterisation because it is too small. Yet Lord Hutton, on the unchallenged evidence of a single pathologist, concluded that Dr Kelly bled to death from the severance of this single small artery in the left hand.

No courtroom drama would be complete without critical witnesses being challenged through the cross-examination process. Like all barristers, I received a rigorous training in advocacy and, because of its enormous importance, I take time from my practice to train barristers in this art. A skilful cross-examination is often the key to ascertaining the truth.
None of this happened in Lord Hutton’s inquiry and witnesses were simply led through prepared evidence. Reading the transcripts, far from providing any sense of satisfaction, leaves me with feelings of frustration. Opportunity after opportunity was lost to pursue answers until every avenue had been thoroughly explored and every ‘escape route’ closed.
At the very end of his evidence, Dr Nicholas Hunt, the pathologist who had conducted the post-mortem, was asked: ‘Is there anything else you would like to say concerning the circumstances leading to Dr Kelly’s death?’ 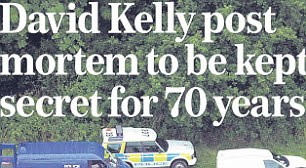 Such a question gives the witness who is favourably disposed to the questioner an open opportunity to go further than his witness statement. It is NOT a question ever asked in cross-examination as it provides a free pass to an escape route.
Dr Hunt answered: ‘Nothing I could say as a pathologist, no.’ He is an experienced expert witness. What on earth did that answer mean? He was there to give evidence as a pathologist. He knew that. Everyone knew that. So why did he give that answer? It begged the question whether there was anything else he knew. Was he ­concerned about any other forensic or factual evidence? These questions were never asked.
Hutton focused on the so-called dodgy dossier and the conflict between the Government and the BBC which, at that time, was more in the public eye. Because it was taken for granted that Dr Kelly had killed himself, the medical evidence was insufficiently explored.

In the absence of any bleeding tendency from a clotting deficiency (and there was no evidence of this) fatal haemorrhage from a severed ulnar artery is so improbable that more evidence was essential before such a conclusion could be reached.
If you want to know how much beer has gone from a full pint glass, it is easy. You can either measure how much has been poured out or measure how much remains. To be confident, you would measure both. The same approach should have been adopted in this case.
As it was not, there is no evidence as to whether there was sufficient haemorrhage from the ulnar artery to cause death. The inquiry fell into the trap of the circular argument: Dr Kelly died, therefore he must have lost sufficient blood.
In my work as a barrister I meet many medics, but I have never met a single doctor who has disagreed with the proposition that it is extremely improbable that haemorrhage from a single, severed ulnar artery would ever be a primary cause of death. 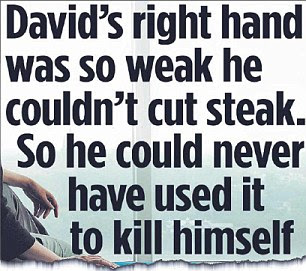 Yet this extreme unlikelihood was never explored with Dr Hunt. Whatever the reason, this was a serious failure of the Hutton Inquiry. It has understandably led to a suspicion of cover-up. This could not have been the cause of death, the argument goes. If it were not the cause, then what did cause his death? Was it something Dr Kelly did to himself, intending to cause his own death, which has not yet been discovered? Was it part of some elaborate plan by others to end his life?
The only way to stop the many theories which abound is for there now to be a thorough and open investigation by way of a fresh inquest. Surely the Government realises that the way to foster conspiracy theories is to be secretive and to resist calls to disclose all the medical evidence. We should pay tribute to Dr Kelly. He was a brilliant man who did his best in the service of this country. He deserves our gratitude and respect. We owe it to him and ourselves to ensure the true cause of his death is ascertained.
* Dr Michael J. Powers QC is a barrister specialising in medical causation and a Fellow of the Faculty of Forensic and Legal Medicine of the Royal College of Physicians to which he is an appointed examiner.

email from me to Rowena Thursby dated 6 March 2004

christopher frost <z2003@yahoo>wrote: > Date: Sat, 6 Mar 2004 01:46:20 +0000 (GMT)> From: christopher frost <z2003@yahoo>> Subject: Re: strategies> To: Rowena Thursby <rowena@onetel>> CC: stephen.frost@> > Rowena> > > > In my opinion, what is "hot" about this story NOW is:> > 1) a group of doctors have had three letters> published> in a national broadsheet mainstream newspaper and> have> said that they do not accept that Kelly committed> suicide by the method claimed (by Hunt and Hutton)> > 2) those doctors remain unchallenged> > 3) the coroner, whose job it is to rule out foul> play> in sudden unexpected deaths, says he wants to> achieve> "closure" at the hearing which he has ostensibly> convened to decide whether the inquest should be> resumed> > 4) at the same time, he decides that the doctors who> have said it was not suicide are not "properly> interested persons" (when he has the power to decide> that anybody is "properly interested") but omits to> put this in writing> > All we need to do, I feel, is to get all our> correspondence with the coroner published (including> your first letter and his highly dubious reply to> our> second letter).  That would put him in an untenable> position, bearing in mind 1), 2), 4) (and 3)).  It> should be pointed out that we have not received a> proper reply to any of our letters. > > Additionally: > > 1) Hutton could not reasonably conclude from the> evidence he heard, bearing in mind the woefully> inadequate questioning of witnesses, that Kelly> committed suicide - crucially he did not, beyond> reasonable doubt, rule out foul play> > 2) there are only two precedents for an inquest to> be> subsumed in a public inquiry : the victims of the> Ladbroke Grove train disaster and Shipman - neither> of> those precedents was politically sensitive> > 3) Hutton lacked the power to call a jury, the power> to subpoena witnesses and the power to hear those> witnesses' evidence under oath - all those powers> are> available to a coroner> > 4) Hutton had no experience of performing the duties> of a coroner> > 5) Hutton was appointed by, and reported to, Lord> Falconer and his (Hutton's) narrow remit was> determined for him by the latter - he was not> independent - the coroner "takes orders from nobody"> (or so I was taught at medical school)> > 6) Hutton was, according to the BBC's lawyers,> "wrong> in law" on 12 separate points with regard to his> judgement on the BBC - was he also "wrong in law"> with> regard to his judgement that Kelly committed> suicide?> (probably)> > 7) why was the Hutton Inquiry projected as an> investigation into whether the BBC or the Government> was responsible for Kelly's "suicide", when nobody> had> established that it was suicide?> > 8) why were the press and other media outlets so> uniformly docile, not mentioning, until our first> letter had been published, even the possibility that> Kelly was murdered?> > 9) Kelly was one of the world's leading experts, if> not the outright leading expert, on biological and> chemical weapons, and, at the time of his death, had> questioned, and was perhaps planning to question> further, the British Government's presentation of> the> intelligence used to justify this country going to> war> with Iraq - in short, a clear motive existed for> murder - he knew so much that there is little doubt> that he could, if he so chose, have brought down> both> Blair and Bush singlehandedly> > 10) so, if his position was so sensitive why was he> not regarded, until proved otherwise, as the victim> of> foul play? and why was the investigation of his> death> considerably weakened by Lord Falconer's "ordering"> the coroner to adjourn indefinitely his inquest?> > Finally, the doctors think it highly unlikely > > (a) that a man of Kelly's intelligence and position> would commit suicide, > > (b) that, had he decided to commit suicide, he would> have chosen the claimed method (particularly in view> of his area of expertise) and > > (c) that, had he, against all odds, done so, he> would> succeed by completely severing a single small> artery,> the left ulnar artery, in the open air.> > Case closed!!!> > Best wishes> > Stephen
Posted by stephen.frost at 10:37 No comments:

IN THE MATTER OF AN APPLICATION FOR PERMISSION FOR JUDICIAL REVIEW

Posted by stephen.frost at 16:53 No comments: